What is Programmatic Marketing? 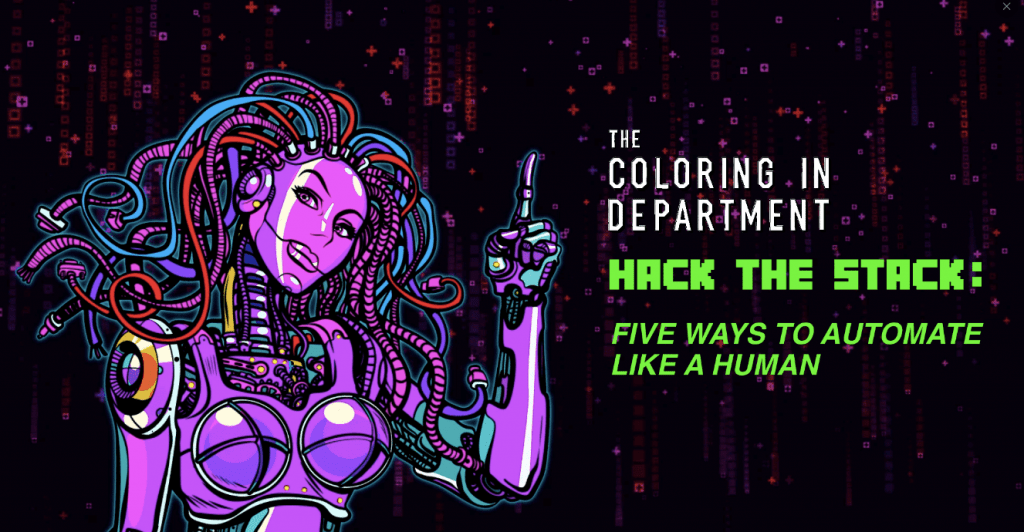 To cut a long story short, everyone has a different perception of paid media, and even more so of its bigger, scarier, better sibling, programmatic marketing...

Hack the Stack – Five Ways to Automate Like A Human

I recently had the privilege of taking to the stage at the inimitable Turing Fest to talk about this very subject, and, given the number as well as epic nature of the questions, I thought I’d write the talk up. Save the tennis elbow on the notes front.

To cut a long story short, everyone has a different perception of paid media, and even more so of its bigger, scarier, better sibling, programmatic marketing. We are all guilty of occasionally doing marketing 1.0 in a 3.0 world, a little bit like sticking a five-year-old in a Ferrari. Not that technology in this case should be ignored, like a Ferrari, it should be aspired to.

To drive this estimable vehicle however, we need to be smarter than we’ve been, because if we are not careful we’ll be using new technology in old ways. I hate the word integration, and just because the whole team is using the stack, doesn’t mean they are working together. Brand messaging is one size, repetitive and stuck at the top of the funnel.

Performance messaging is locked into an eternal spiral of “buy now” and “join us” garbage. Basically, everybody is not at their best.

The talk explored how the factors of programmable advertising (automation, data, integration & scale) come together, and hopefully don’t blow your brand and budget to pieces. Maybe then we’d even start to move past leveraging the buying technology and start serving the right messages, in the right way, to the right people.

To a degree though, as much as short talks allow, this is an oversimplification of sorts. If it were easy, we’d in fact be doing it. The fear factor of new, unknown, sometimes impenetrable tech options does, and should, bring pause. Equally, the speed at which is changes take place can be extremely daunting. The panic is inherently warranted but isn’t really that productive.

Productive is driving towards efficiency at speed. Leveraging automation in advertising, both buying and serving, using the audience data available to the best of your ability and measuring the living hell out of the lot. Admittedly, we say we are doing this already, but I have to just drop a little note here and say – we aren’t.

The truth is, if we are advertising centric, we can hit our short terms goals with relevant (hopefully) advertising. We rarely satisfy human needs, we “add value,” sure – but we also get in the way, a lot. On top of that, we have one team force feeding relatively irrelevant advertising to people, or worse, just doing “performance” and stalking people around the moment of purchase. Let’s stop before we drop. Stop and think. A few tips on the thinking front.

In advertising, as we know, the audience is god – and we are tired, and sometimes lazy. That means, we mostly want to identify who they are and what they want, as well as give it to them as quickly as possible. Now, we can do this, between our own data (1st party), media platforms, like Google (2nd & 3rd party), and good other fashioned third-party data providers, from Experian, for instance. Practically, that might look like a few things:

Don’t get me wrong, getting the right audience from the black box of the stack is hard work, but you’ll know you are nearly there when they start to nail the KPIs you’ve set for yourself.

Great, found them, got them – but what to say to them? We tend to, on the whole, communicate messages that we want to communicate, not those messages that the audience actually want to hear. We need to thing sequentially here, in our story at least – it helps to answer these questions in constructing linear messaging:

Lead them down the digital garden path, as it were.

If I’m honest, people get lost here, big time lost – as there are up to a thousand different major ad units at this point in time. The media agency knows some of them from planning, the creative agency only knows what they are told to work with, and the brand – knows very little of anything beyond the position. When’s the last time you sat down and looked at the new, cutting edge formats, I’m going with never.

There isn’t a right or wrong format for you though, there is for a campaign, a customer, and an outcome however. To be both genuinely impactful, as well as helpful, is the name of the game here – and answering these questions might help:

If it’s no to any of those, start again.

Listen, some of the greatest campaigns in the world managed to be all things to all people – but none of them lacked for measurement. You can just pay the money, spray ads everywhere, and pray to gods (old and new) that it all worked. You need to not just measure and track your work, but also validate the effectiveness of your media and creative, which the questions here might help you with.

The People Who Matter

To make all of the above work, we need to work together. Now it’s not my intent to harp on about collaboration here, but it is my intent to encourage you to think about the different skills that make programmatic pop – the business folks, the data nerds, and the creative people. Now, more often than not, these people speak totally different languages, totally. So, you need to hunt out those who can bridge the gap, the integrators, the godsends, the magicians. Magicians make the magic happen.

If we don’t genuinely appreciate that we have new capacities technologically, new ability and skills, as people – and a whole ton of news processes that we need to get working – we might as well fill a trash can with money, put it on the boardroom table – and light it on fire. We are trying to be environmentally friendly now, sustainable even – don’t burn your budget.

Think fast, think smart, think together – and everything is going to be ok. 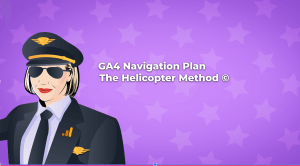 The Helicopter Method © is your navigation plan for GA4 which is broken down into phases. 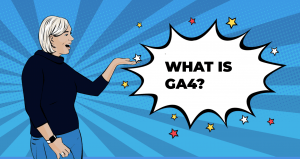 New GA who ‘dis? Oh, hi GA4! Read on to learn about the key differences between UA and Ga4 and what to expect from this upgrade.

join the coloring in department and be in the know!

We use cookies on our website to give you the most relevant experience by remembering your preferences and repeat visits. By clicking “Accept All”, you consent to the use of ALL the cookies. However, you may visit "Cookie Settings" to provide a controlled consent.
Cookie SettingsAccept All
Manage consent

This website uses cookies to improve your experience while you navigate through the website. Out of these, the cookies that are categorized as necessary are stored on your browser as they are essential for the working of basic functionalities of the website. We also use third-party cookies that help us analyze and understand how you use this website. These cookies will be stored in your browser only with your consent. You also have the option to opt-out of these cookies. But opting out of some of these cookies may affect your browsing experience.
Necessary Always Enabled
Necessary cookies are absolutely essential for the website to function properly. These cookies ensure basic functionalities and security features of the website, anonymously.
Functional
Functional cookies help to perform certain functionalities like sharing the content of the website on social media platforms, collect feedbacks, and other third-party features.
Performance
Performance cookies are used to understand and analyze the key performance indexes of the website which helps in delivering a better user experience for the visitors.
Analytics
Analytical cookies are used to understand how visitors interact with the website. These cookies help provide information on metrics the number of visitors, bounce rate, traffic source, etc.
Advertisement
Advertisement cookies are used to provide visitors with relevant ads and marketing campaigns. These cookies track visitors across websites and collect information to provide customized ads.
Others
Other uncategorized cookies are those that are being analyzed and have not been classified into a category as yet.
SAVE & ACCEPT